A big hello from Year 2 at Frank Chapman. We arrived safely, unpacked and went straight outside to explore. 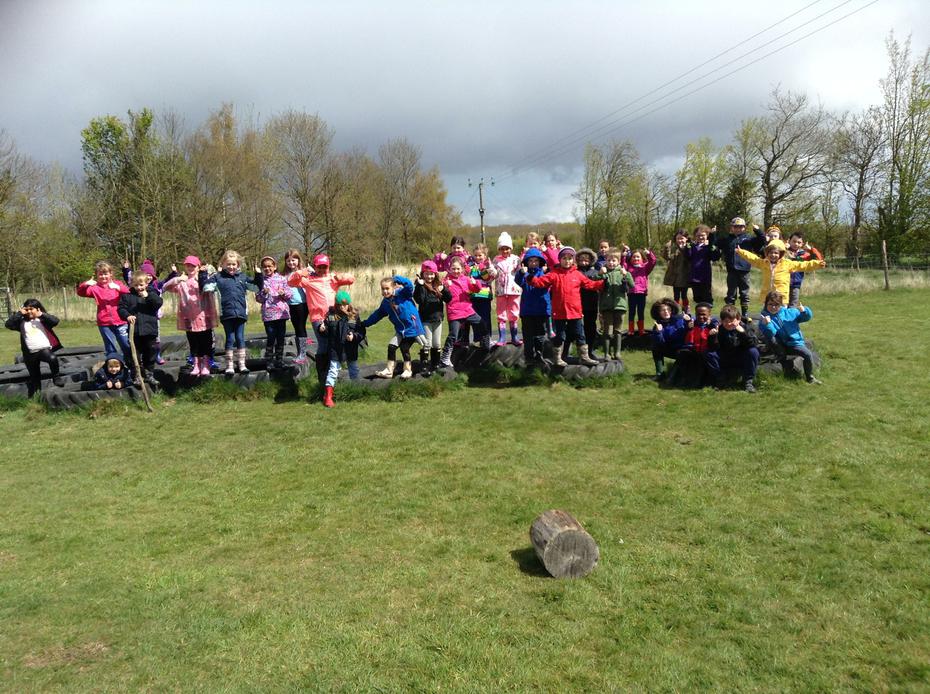 We had an important talk about safety and rules. We then had our delicious lunch and were ready to set off for our big adventure.

Miss Vance's group became animal detectives and went on the hunt for some rabbit holes and along the way we found deer tracks. We were filled with lots of information from Glyn and Tom and even managed to impress them with our prior knowledge of the outdoors. Mr James managed to hop along too!

Miss Williams' group went low rope climbing and went into the mines. We needed to wear safety gear for the mines and use our torches to see where we were going. Then we were very brave and went through the mine without our torch.

We had a challenge, to get across the lake without being eaten by the crocodiles, we all survived ... JUST!

Mrs Goldie and Mrs Smith's group went off to make Elf houses using woodland materials, the children really enjoyed this and took it seriously. The children used a flint to make sparks to ignite a piece of cotton wool, they made their very own (controlled) fire.

The best part of the day for the children (and the staff) was getting literally stuck in the mud!

Parent's be warned, stock up on washing powder!

After our outdoor activities we came back, washed our hands and sat down in the canteen.

We had to make sure that we ate everything we asked for on our plate because we didn't want any waste. Mr James had to take one for the team and eat Miss Williams' left over branston pickle on her plate.

We finished our dinner and went on an evening walk to visit the Magic Tree. We all made a wish and could feel the tingle in our arm, which meant that our wish had been listened to.

The children are all tucked up in bed and fast asleep.

We will keep you updated, when we can.

Goodnight from all of us at Frank Chapman

We woke up this morning with some tired eyes and yawns, but we were all excited to see what was planned for today. The sun is shining and the wind is strong, but we are all wrapped up ready for our day of exploring.

But before we run ahead, we can't forget breakfast!

With breakfast eaten, it was off to brush our teeth and get set for the day.

Catch you later with all the news!

After a long, fun-filled day, we are now all tucked up in bed after a hot chocolate and story in our room.

Here are some pictures from our adventures - we hope you like them!

This morning Miss Vance and Mr James' group went through the mines and tackled the low rope challenge.

Riley said 'the mines were really scary because when you went in there you could spot spider webs in the corners and there were some dead ends. But we were really brave because after 3 we turned off our torches and it was pitch black.'

We had a little break, followed by some warm squash and a game of eye-spy and were back to questioning Neil about the crocodile lake.

'Crossing the crocodile river was scary because when you went onto a small log you nearly fell off, my wellie touched the water but I saved myself from falling' - Millie

After making our own lunch we were off on another adventure, which by the end of the day was the noted to be the favourite by far! Can you guess ... It had something to do with MUD!

'This is the best day EVER'

We made elf houses, battled through the mud and started our very own fire.

Miss Vance and Mr James apologise for the amount of mud they are covered in, but please remember they have 'had the best time EVER'

Videos to follow when we are back to school.

Over to Miss Williams' group now.

First we set off through the forest alongside streams where we nearly lost a pair of glasses (Harry). The children went squelching through the mud, which they thoroughly enjoyed ... Until we reached our destination.

The children were shown how to make a fire (safely) using striker, cotton wool and bits of wood. Kayleigh was the first to ignite the cotton wool, she was extremely proud. the rest of the group continued to persevere until most made their own fire.

We had the opportunity to make a chapati each and cooked it on an open fire, it was absolutely delicious.

After lunch we set off to become Animal Detectives, we were on the hunt to find different habitats and different animal poo. As you can imagine the children found this hilarious!

Their feet started to ache so they found a different mode of transport - rolling down the grassy hill.

The children were left to explore the woodlands, to see what they could find.

When they became stuck in the mud - literally, the children had to use their team building skills to help get each other out (everyone has returned safely).

Mrs Goldie and Mrs Smith's group started by investigating the different types of animals in the woodland. We were looking for animal tracks and poo, which like the other groups, they found it hilarious!

After lunch we attempted the low ropes course and the mines, the others had said it was quite tricky - but we were fantastic!

A tired goodnight from all of us ... especially the adults!

We will see you all tomorrow

The final day is here and the majority of us are sad to leave! We have all stripped our beds and have been for breakfast. We are off on our final activity which is a treasure hunt, lets hope we come back with some goodies.

Mr James survived with one working leg and Miss Williams has had a lovely break!

We will see you all soon